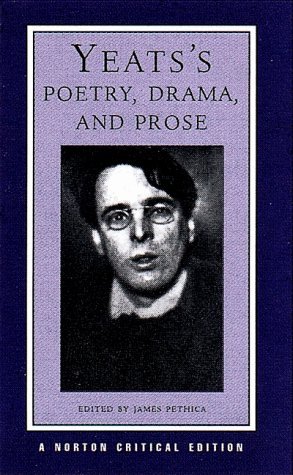 ISBN: 9780393974973
Pages: 518
Description: For the selections I read, I would give this collection about a 3.5, but looking at it as an entire overview of Yeat’s major works along with critical background I went with 4 stars rather than 3. I am a big fan of Norton critical editions (I’ve been a Norton supporter since undergrad), because they tend to pull together a lot of interesting and relevant background and critical material in addition to some of the most important and influential texts in the field of English lit.

As far as the Yeats collection goes, I like Yeats, but I am not a huge poetry fan. I think poetry requires a way of thinking that I’m simply not that accustomed to from reading plays and novels. Some of the poems here I love–“The Second Coming,” “September, 1916,” for instance–but then others simply didn’t do anything for me. I think a lot of the poems, especially those written to or about Maude Gonne, required a much more detailed background knowledge than I have (or the editors hinted at) in order to understand the allusions.