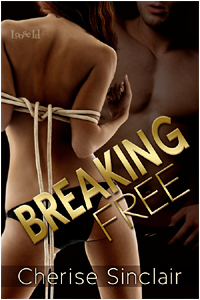 ISBN:
Pages: 170
Description:
This, the third installment of the Masters of the Shadowlands series is every bit as good as the first two, and in my opinion, even better. I’m a huge fan of the Romantic Suspense genre, so I really enjoyed the action/adventure aspect to this story.

After a failed attempt at escape almost cost Beth her life, she has finally gotten away from her sadistic husband, Kyler Stanton, who has left her badly scarred, both inside and out. Free and on her own, hiding from the man she is terrified of, she tries to create a new life for herself which can still include the BDSM sexuality she used to enjoy. However, her husband’s horrible brutality has left her with nightmares, and she’s now a woman unable to find pleasure in submitting to anyone. Needless to say, no Dom has been able to meet her needs and so Master Z gives her a choice; accept a Dom of his choosing, or leave the Shadowlands for good.

Master Nolan has agreed to take Beth into his care and command. He’s a no-nonsense, demanding man who, under no circumstances, will allow anyone to lie to him or disobey him, and get away with it. He knows of Beth’s past and the man who abused both her body and soul, but he only knows as much as she has told him. As he and Beth become more than just Dom and sub, she begins to trust again, allowing herself to be completely open and submissive to Master Nolan. The future looks bright for the two of them, until the rest of Beth’s past is revealed.