﻿Title: By Any Means Necessary 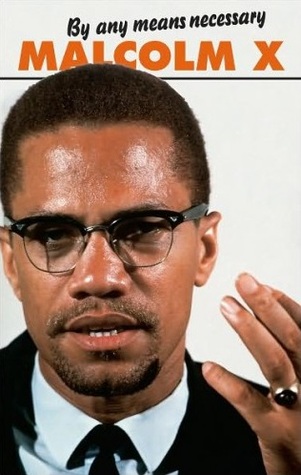 ISBN: 9780873487542
Pages: 191
Description: Malcolm X
Unlike most of the people I’m writing to I don’t like to read, but if I were to read a book I would choose the Biography of Malcolm X. Like most of the civil rights activists Malcolm wasn’t content with being called a “nigger” for the rest of his life. Malcolm was born in Omaha, Nebraska. He was the second youngest of seven. I don’t want to tell the book because the point is to get you to read it. This book will get your brain thinking in a different way about how things were back when black people and white people were unequal.

This book will make your emotions run with happiness, sadness, confusion, and shock. This book is full of twists,turns, and action packed chapters that show you the life of Malcolm X. It’s interesting to see the big transformation from when Malcolm was young to when Malcolm was older and the intelligence that Malcolm had gained from the mistakes and observations in his life. Part of the transformation was Malcolm being raised in a house of god leaves get’s into trouble, believes there is no god to the point where Malcolm becomes a man of god and follower of Ala.
If you read this book cover to cover your life will be changed, This book has opened my eyes to how hard it was to get the freedom I have today. This book may also not be your cup of tea. If you would want to look more in depth about Malcolm’s life in his words I would recomend you read Malcolm X’s autobiography. This book will change your views about stuff you never thought you would think of and then some. Thanks for listening