﻿The Worst Witch Saves the Day 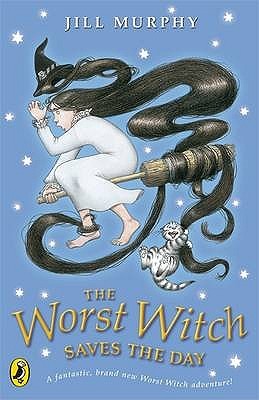 ISBN: 9780141314341
Pages: 156
Description: In this fifth book in The Worst Witch series, someone’s pretending to be someone they’re not, automatically deceiving everyone in their passage, including trouble-prone Mildred.

While I did enjoy this sequel, I found it not as surprising and creative as the last. Many elements were recycled from past books—there’s one even the author acknowledges—and while Mildred’s attitude towards them changes, seeing her reactions was not enough entertainment to make me love The Worst Witch Saves the Day as much as the others.

Also, it’s more like The Worst Witch and Her Friends Save the Day, because without them, Mildred would still be in trouble right about now. Her friends often come to the rescue, by the way. It’s about time someone mentions that.

Every character gains maturity, except for Ethel. It’s as though her immature, unexplained feud with Mildred will last forever. The worst thing is, Ethel doesn’t even have minions, so she’s just some random villain who annoys most people and no one seems to fear. At least now, she hides some of her sneering.

It was good to learn that Mildred has a family—a mother, at least. That’s all that was explicitly said. But at least she was mentioned. Before, I didn’t even know if she had parents or not. Only the girls and school are talked about in the series. Nothing of the exterior world. I wonder if the mundane people even know witches exist.